Process of creating a borehole

What steps should be taken if the client wants to install a borehole?

Summary of actions to be taken to create a borehole in accordance with regulatory enactments:

The following documents are required from the client:

Depending on the season of the year, the time of preparation of the necessary documents and their review from the conclusion of the contract to the start of drilling works is 1-2 months. At the end of the works, a well with a two-year warranty period is handed over to the customer and a copy of the well passport accepted by the LEGMC.

In cases when it is not necessary to draw up a license (for wells up to 20 meters), then a well passport is prepared by us.

Where can a borehole be drilled and how long will it take?

We drill deep wells with a drilling rig mounted on a truck. Therefore, convenient access to the planned drilling site is required. If the well is planned in a place with dense construction, the site is inspected and opportunities identified first. The construction of the borehole itself at the site takes on average 2-7 days or more if the depth of the borehole exceeds 100 m. The main factors that affect the time required are the depth of the well and the rocks we encounter during drilling. It is desirable to have electricity connection and technical water available at the drilling site, as several cubic meters of water are used in the drilling process. As well as a pond, ditch or a friendly neighbour. 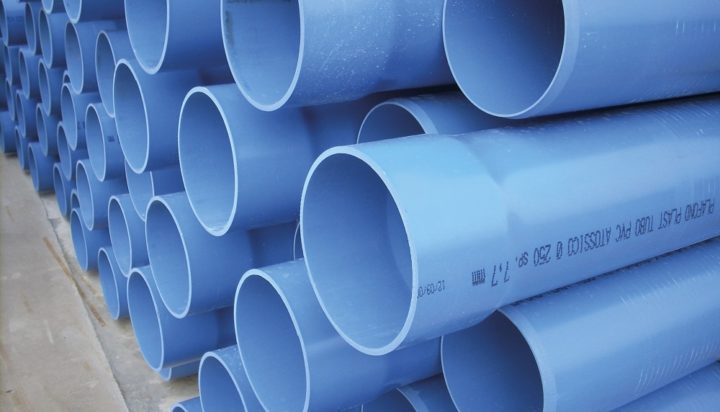 We offer three types of pipes for drilling equipment, which differ in mechanical and chemical resistance, as well as costs:

The diameter of the pipes to be used depends on the chosen well construction, the type of casing pipes and the amount of water required. To insert a high-capacity pump (6”), the operating column must be 168 mm in diameter, a medium-capacity pump (4”) 125-140 mm in diameter, and a low-capacity pump (3”) with a service column 114 mm in diameter is sufficient. When making deeper boreholes, a telescopic pipe construction is used. For PVC pipes it is most often a combination of 125/89/60 mm diameters, but for steel or stainless steel pipes 168/140/129 / or 114/89/60 mm respectively. 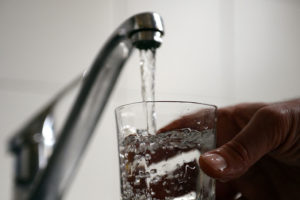 The water obtained in the installed well has the chemical composition that has historically formed in the specific place and on the rock horizon. The drilling process does not affect the chemical composition of the water. In accordance with the Latvian Minister Cabinet’s Regulation No. 671 “Mandatory Harmlessness and Quality Requirements…” chemical and bacteriological analyzes of water are performed. In general, Latvia is rich in good quality drinking groundwater. Against a general background, elevated iron content in water is typical, the concentration of which is most often in the range of 0.4-1.5 mg / l, but also tends to be higher. The maximum acceptable concentration is set at 0.2 mg / l. In itself, the increased presence of divalent and trivalent iron cations in water is not harmful to the human body, but in contact with atmospheric oxygen, iron oxidation occurs, the water turns brownish, as well as deposits form on the surfaces of plumbing equipment. The second most common problem is increased water hardness. It is observed mainly in the western part of the lowlands of Central Latvia, including Riga. The increased hardness of water is determined by the content of calcium and magnesium salts, which enter the water in the form of sulphate compounds, dissolving gypsum in the earth’s layers. Bacteriological analyzes of water are performed to make sure that the drinking water is not infected with bacteria harmful to the human body, such as enterococci, coliforms and Escherichia coli. Under natural conditions, such bacteria cannot be present in groundwater. They can only reach there through prolonged infiltration of contaminated surface water or groundwater, if the water horizon is poorly protected by impermeable layers, or if poor quality cementation of borehole pipes has been performed. In areas where the presence of sulphates in groundwater is high, anaerobic sulphate-reducing bacteria are active, resulting in the formation of hydrogen sulphide and the water acquires a specific odor. They are especially active in hot water boilers.

Water quality can be improved by installing appropriate filters. In-store cartridges can be used to reduce iron content and neutralize hydrogen sulfide. Significantly more expensive, but more efficient and productive is a stationary water filtration device, which softens, clarifies and deirons the water – for example, the CL135B.

Groundwater and its extraction 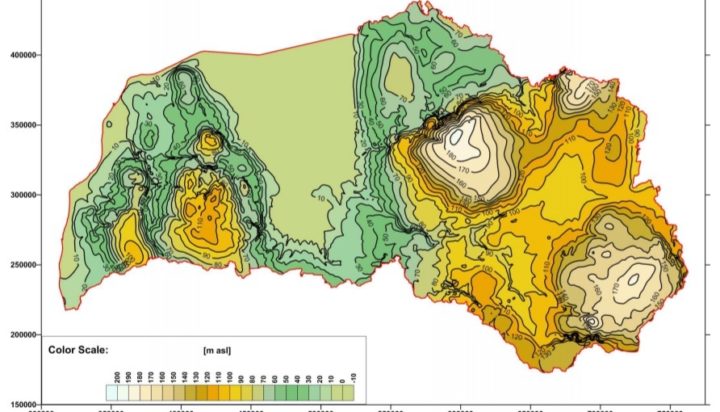 Water, which is the basic element of all life, is in constant motion in nature. From the surface of the earth and the oceans, even from the glaciers of Antarctica, it evaporates, accumulates in the atmosphere and in the form of clouds, the wind carries it, far away from its original place, to quench a thirsty corner of nature on a completely different continent. Part of the atmospheric precipitation is assimilated by vegetation, part enters rivers and lakes with surface runoff, part evaporates again, and part water infiltrates the soil and enters the groundwater. In Latvia, the amount of average annual precipitation is usually in the range of 650-750 mm, about a third of which enters the groundwater. Due to the abundance of solar radiation, we evaporate considerably less into the atmosphere, and groundwater is replenished every year with fresh, practically non-mineralized water. Water, filtering through the Earth’s rocks, is enriched with minerals and becomes drinking water for both man and the world of flora and fauna. The exact opposite processes can be observed in the so-called arid climate areas, where precipitation is significantly lower, solar activity is higher, so water evaporation dominates over water infiltration into groundwater, forming salty or slightly-salty water that can no longer be used as drinking water. This problem affects many countries in Asia, Africa and Latin America.

The Baltic region is very rich in fresh groundwater. Atmospheric water, once in the groundwater, continues to filter through rocks of various lithological compositions on deeper layers or water horizons. Geologists classify water horizons according to the peculiarities of rock filtration and geochronological age. Water extraction on the horizons is mainly from sandstones or cracked dolomites. Horizons are most often separated from each other by cage layers with very poor water permeability – clay, marl, siltstone. Groundwater is usually free of hydrostatic pressure. From them infiltrated into deeper horizons, the water is already under pressure, and such groundwater is called artesian. In the territory of Latvia, 15 artesian water horizons have been identified, which in total form an active freshwater exchange zone up to a depth of 350 m and are a part of the Baltic artesian basin. Geochronologically, they are mostly associated with Devonian sediments, which are 350-400 million years old. The water horizons of the Upper Devonian Gauja, Pļaviņas and Daugava are the most widely used in Latvia. According to their chemical composition, they are hydrocarbonate – calcium – magnesium type waters with mineralization up to 0.6 g/l, hardness 5-8 mg-eq/l and increased iron content 0.4-1.5 mg/l. Piezometric water levels, depending on the relief in the boreholes, are most often in the range of 5-20 m from the ground surface, in the lower places they can be fountained, but near the Gauja ancient valley the water level can be very low – 70-90 m from the ground surface.

Water extraction wells (or artesian wells, boreholes) are most often telescopic vertical pipe constructions, consisting of a service column cemented in drilled rocks and a filter column, which is inserted into the exposed water horizon through the service column. The pipes used in the boreholes can be plastic (PVC), black steel/ferrous steel, stainless steel or a combination thereof. The interval in the rocks of the water horizon from which the water is extracted from is equipped with a filter. It can be part of a filter column tube that is simply perforated, perforated and additionally covered with a fine sieve, they can be prefabricated special gap filters of appropriate diameter or sieve/gap filters with gravel backfill (called Johnson filters). The application of a particular filter depends on the lithological structure of the water horizon and the amount of water to be obtained.

If it is planned to obtain 100 and more m³/day from the installed borehole, or several boreholes are installed in one place, which in total give more than 100 m³/day, such borehole or a set thereof shall be called a groundwater deposit or water well. The legislation specifies that in such a case it is necessary to perform additional hydrogeological research, including computer modelling, to determine the groundwater reserves for a longer period (25 years) with the obtained hydrogeological parameters and prevent their depletion during operation. Based on the obtained database, the State Environmental Service issues the user a groundwater deposit passport. Water extraction wells are installed using special mechanical drilling equipment, using the direct rinsing method.

The easiest and also the cheapest way to get groundwater is to install a small borehole(in Latvian “spice”). It can only be installed in places where the groundwater is in sandy sediments and the water level is close to the ground. It is usually a 50-60 mm diameter steel tube, the bottom of which is equipped with a sieve filter. The pipe, with the help of a water pump, is rinsed in the sand at a depth of 5-10 m and is connected it to a vacuum pump. However, it must be taken into account that groundwater is not protected from chemical and bacterial pollution.